I have complex walking systems for my dogs that include the routes we take, the technology we use and wear, and the dog combos I take out together.  This all depends upon time, weather, road and trail conditions, and energy level.

Now that our area is cold and snowy, when I walk on the street and there is an icy layer of snow, I use some kind of strap-on treads on my shoes or boots.  I used to use Yak Tracks but they broke pretty quickly (the rubber bit that comes up around your shoe absorbs a lot of friction and tends to fray).  So, now I use these.  I mostly use the Due North ones on the bottom – I strap them on my Bean boots and leave them there all winter.  But for heavier duty traction, I also use the Stableicers.  I HATE falling and, in our lake effect snow area that averages 200-250 inches of snow a winter, that snow packs down into icy for much of the winter.  I won’t walk the dogs on the street without some traction unless there is bare pavement and great traction.

Gilbert the beagle is not a very motivated walker.  His idea of a walk is following scents hither and yon, not walking in a straight line down the street or on a trail.  He gets 1-2 walks around the blocks or short walks into nearby woods.  Because of his thick neck, he always has a soft harness on and I keep a short leash attached.  Because of his nearly blindness and deafness, unless he is crated, he always has this short, light leash on – inside and out – I need to be able to grab him to lead him outdoors or wherever I want.  When it is cold, he wears this great, thick dog coat in a size or two bigger than needed because I like the full body coverage.  This dog coat also has reflective stripes so that cars can see him at night.  And it has a little opening where you can attach the leash to a collar or harness.  Everybody has tags with my name, address, email, and phone # (and Rabies tags) and Gus is micro-chipped and has a tag for that as well. 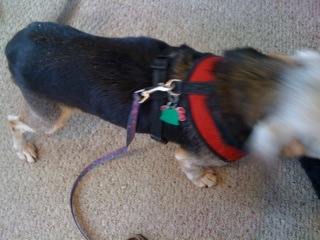 Ruby and Gus usually get 1-2 walks on the trails a day.  I’ll often take Gus for a long jaunt around the neighborhood to practice leash walking and “leave its” with other dogs and people and also to keep up his socialization.  Gus wears an easy walker harness (as does his boyfriend Arvo in the picture below).  This harness is aimed at medium level pullers and discourages hard-core pulling.  It works well for me, but if you have a puller, try different harnesses – there are ones for really hard pullers.  For Gus and Ruby, I always use well broken in, thin leather leashes – I love their durability, comfort in your hand, and traction in your hand.

I’m lucky to live a couple blocks from about 100 kilometers of trails and abandoned roads.  In the winter, many are groomed for cross country skiing.  Lots of areas out there are great for snowshoeing and there are places people keep so packed down with snowshoes that you can walk in boots on them.  I’m fortunate to be able to choose loops that range from 20 minutes to several hours and everywhere in between, depending on how much time I have and who I want to avoid.  I typically only let Gus off leash in areas where I don’t expect to see people much, but I do this daily.  A big concern is ATVs, motor bikes, and snowmobiles (and the occasional illegal car or truck on the trails), but there are also mountain bikers and runners – I don’t want him to be hit or to chase a bike or runner.  I love when I encounter dog lovers with or without their dog-friendly dogs on the trails.  It is great for my dogs to meet people and for Gus to get a chance to play with another dog or two.

Since deer and other game seasons are going on, they are wearing dayglo colors.  I also like to be able to easily spot Gus when he’s off in the woods now that the leaves are gone.  Gus’s green coat also provides some warmth, but has the ongoing challenge of the front Velcro strap coming apart.  I prefer the snap-in type attachments that are on Ruby’s orange vest.  I’ve also got bigger, warm coats for both that are somewhat colorful, have reflective tapes and are good for colder temps.  When I cross country ski with Gus, I use a belted leash that goes around my waist and often put a bell on him.  When I’m in spots where I expect very few people I let him run.  Again, I try to minimize his interfering with people, like skiers, who didn’t plan to play with my dog during their ski.  I do take high value treats and work on recalls with both dogs – Gus is doing well when there are no distractions, but won’t come to me when there is another person or dog he wants to meet.

This is one of the walks I like to do when I don’t want to see anyone – this is a utility corridor that has no real trail, it is lumpy and bumpy, but I’ve never seen another soul walking it.

Sometimes, like this morning, I drive for a few minutes to get to a place I want to hike into.  I worried for years about driving with loose dogs in my car, particularly when I was doing a lot of 200 mile round trip drives for dog training.  So, I started using a seatbelt for Gus.  This type of seatbelt can be attached to actual human seatbelts or to a belt across the car ceiling (it hooks into the handles at the top of the door inside the car that I never noticed were there).  The seatbelt attaches to a special harness. 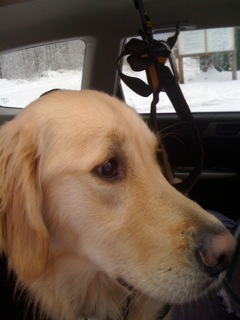 Gus is always on the seatbelt when he is in the car.  He tolerates it fine, although it does sometimes twist around.  He’s a fantastic, young dog I love a lot and have put a lot of work into.  I’d be devastated if he was killed in a car accident because he was loose.  Ruby and Gilbert go into the back-back of my Subaru Forester – they are super seniors who can’t as easily be seatbelted on the back seat.  I’ll feel really bad if they are hurt in an accident, but they have both already lived beyond their expected life span, so I think I can live with this.  Maybe this seems callous, but it would be extremely complicated to try to belt up all of them and would probably require separating them into three different spots.

Once I got my Forester, my elderly, big dogs (Ruby and Breezy the coonhound) weren’t able to easily get into it.  Ruby has a mass on her belly that is painful and she is over 70 lbs and hates being picked up – in fact, if pushed, she will bite if someone is trying to lift her.  So, I got this ramp which has worked beautifully for both Ruby and Breezy.  I have to aim Ruby up it, hold onto her collar, and be ready to support her back end, sometimes she tries to bound up it and collapses.  Similarly, I aim her down it when she needs to get out and hold on to her collar so she doesn’t try to leap out.  She’s done this – her back end collapses and it is frightening to me, but she has never injured herself.  However, she could break a hip doing it (according to my vet) which would likely be something from which she would not recover.  So, I always control her entrances and exits.  Gilbert the beagle will walk up and down the ramp although he sometimes finds it hard to keep going near the top.  But he is 26 lbs and easy to lift in and out.  However, like Ruby, he’ll take a flying leap out if given the choice – probably less of a danger to him, although it could mean he is loose in an area with cars.  So, he’s closely supervised also. 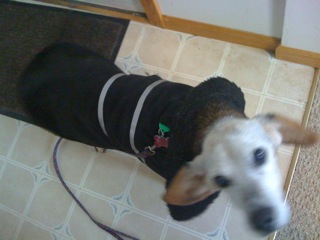