I’m guessing that at least a few readers who stop by here walk around, like I do, with a list of dogs in mind that they would happily live with. High up on my list would be the Borzoi. 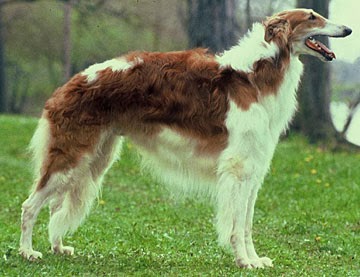 A tall, elegant looking breed, the Borzoi has a quiet nature that is far less demanding than the average terrier. Sensitive and intelligent, these big dogs are very capable of quietly watching the world as long as they are given several good walks or runs a day.

As with all sighthounds, Borzoi were originally breed to hunt game and run it to ground. As a result, this is a breed that does enjoy an opportunity to stretch their legs.

At the same time, once they’ve had their exercise they settle down very nicely. As a sighthound though, be aware that when out – which should always be on-lead or in a fenced in area – they are prone to chasing quick movements. A dog that might be fine with the family cat inside, might respond differently if the cat were to run across the yard outside.

They can also be a bit independent – again a natural trait of a breed that was designed to work out in front, and well ahead of people; they couldn’t be successful if they waited for a person to tell them what to do.

A combination of strong instinct and an ability to think and react fast remain part of the breed. Some individuals are also rather comical, another trait we’re rather fond of here at saved by dogs.

Overall, this is a gentle breed who despite their size do not make the best watch dogs – if that is, you expect a watch dog to bark. If you want a dog that is likely to just watch, however, then this is an ideal breed!

They’re very observant without being terribly judgmental. They won’t necessarily object to people wandering in and out of the house; which is good if you have a number of welcome visitors. If you want a dog to raise an alarm, however, you’re better off doing what nobility often did and keeping some back-up terriers, who are always more than willing to bark.

If you want to live with dogs who have spent generations with royalty, then you need to be prepared to meet some of their simple needs – a chair or couch with a view being chief among these. They are after all sighthounds, and want to be able to see what is happening. 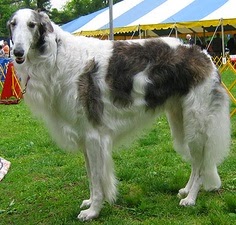