Schnauzers are not all the same and it is more than size which makes a difference.  When compared to each other, each one of these three breeds has specific personalities, energy levels, and temperaments. 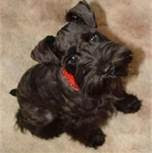 For 24 years I lived with Miniature Schnauzers and they are a breed near and dear to my heart; even so I would not recommend them to everyone. They are one of the most common members of the terrier group and usually rank as the most trainable terrier – considering of course that we’re comparing them to other terriers when I say “most trainable.” When ranked with other breeds they are also considered the most trainable of the Schnauzers.

Sorry fellow Schnauzer enthusiasts but working with a trainable terrier still isn’t like working with a breed that was developed to be trainable like a Shepherd or Golden. Mini Schnauzers were bred to be independent hunters, vermin killers and the attitude needed to do this work is not the same as the attitude or temperament required to work hand in glove with a human.

The Miniature Schnauzer is usually very loyal and devoted to their people. They are in turns independent and then Velcro dogs. When raised with families they are excellent family members. They tend to be loud, having an opinion about everything that they insist will be voiced. Although usually friendly it is not uncommon for a mini to rear up on their hind legs as they charge forward barking — this is “hello” in their world. They are Napoleons of the dog world and tend not to back down from much larger dogs, convinced that their forceful personalities will carry the day no matter the other dog’s size. 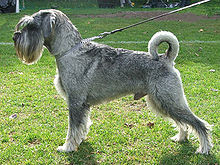 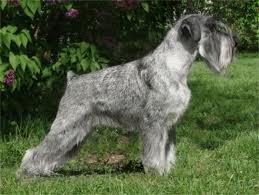 The Standard Schnauzer is far and away the most reasonable, quiet, and calm member of this extended family, as well as being the “original” Schnauzer. Ironically, they are also the least common of the Schnauzers. Is there perhaps such a thing as being too average? They are not quite as quick to train as the Mini but are still a very biddable breed of dog.

The standard has average exercise needs, is a fairly average size, with a levelheadedness that may make them seem too average for some…? The only other reason I can think of for their lack of popularity is that, having long been less common that the Giant or Miniature, not enough people realize what they are missing out on by not living with this good looking working dog.

The Standard is as close as you can get to an every man’s Schnauzer. Of course, they were designed to work and do best with consistent handling. In fact, the Standard could do the work of both his smaller and larger cousins — he could chase vermin, guard flocks and family, and help move livestock to market. This is a very pleasant dog that deserves to have a wider audience of admirers than the bred does. The Standard is a little more ready to be independent around people than is the Miniature but does not have as strong a guard presence as the Giant.

The Giant was developed to be a guard and drovers dog and most bloodlines continue to show the guard attitude. These should never be mean dogs (unfortunately some bloodlines are) but they are expected to be suspicious and aloof with strangers, clearly announcing when someone approaches their territory. At the same time, with their own families these dogs can be goofy and good natured – this is a high energy dog that requires a lot of exercise if it is going to be well behaved. 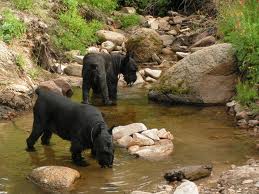 This should an agreeable dog who does well with other animals and children.
My aunt lives with a Giant (Jack) who adores young people and has even left his yard once or twice to hang out with the neighborhood kids, who can lead him around in a way that neighborhood adults would never dream of. 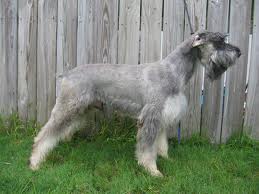 Jack is also a great example of how patient Giants can be with smaller dogs, including terriers. Poor old Jack is now being ruled by the second much smaller female terrier of his life and he always handles these situations magnificently.

Jack the Giant and his new girl, Bess

Three sizes, three unique personalities, three levels of “train-ability.” And yet, I cannot say amongst them there is a breed for everyone. You have to appreciate a fairly square build, a slightly rough haired dog, with a bit of independence from time to time in order to like a Schnauzer – these characteristics more than any other are what make them all part of a loosely related family. 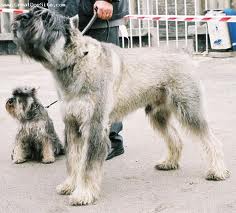