An online friend was wondering about a breed of dog that would be big enough to assist as a mobility service dog, good natured  enough to be part of a family with grandchildren visitors, and with a capacity to herd the family cow in from a field. The Old English Sheepdog fits the bill. 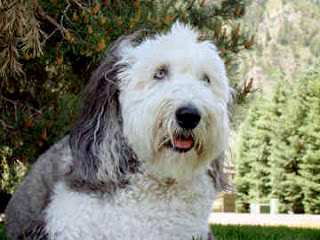 Trainable, affectionate, natural herders, and having a sense of playfulness, this is a breed that has a great deal of underutilized potential. Their lack of popularity may be due to the rumor that their coats are hard to keep – in fact no more so than any long haired breed, or it may be due to their need for exercise. As with any breed, this is not a breed for everyone, it is a breed for families and individuals who want a furry, friendly, active companion.

When one of my friends had her first toddler she chose a Sheepdog to help her watch over her son. The family had a very large fenced in yard and when the little boy would stray to the far end of the yard, the Sheepdog would help my friend by herding him back towards the house. Unlike some herding breeds which use nipping at the heels to try and move children – an unwelcome behavior – the Sheepdog would simply use her body to block the toddlers movement in every direction but the one she wanted him to move in. Of course the child would get frustrated but the dog would patiently endure his screams of outrage and he would eventually give in and move in the desired direction.

(My friend was supervising – this isn’t a case of the dog being used as a nanny – just an aid.)

Sheepdogs tend to have an affinity for children and other animals, making them good candidates for busy households. That said, this is not a breed that can be left alone in the yard all day and expected to behave well for 20 minutes of family time in the evening. These are very people orientated dogs; modern Sheepdogs affinity for being out with animals has been adjusted but they still require a sense of belonging – they now want to belong with people, in the middle of what the family is doing. 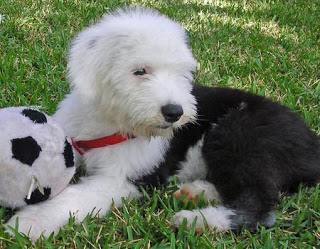 They’ll be happy to help the children practice soccer in the backyard, train for track and field, then flop out in the evening to watch a show. They do need to be given some kind of outlet for their energy, or they may create their own activity. Bored and under exercised dogs usually become destructive dogs.

With a good nature and at times a bit of silliness, this is generally a cheerful breed that will be a welcome addition to those homes that are willing to provide the lifestyle this breed thrives in. There are breed specific rescues working to place adult Old English Sheepdogs and the breed also turns up from time to time in all-breed rescues.

If choosing to buy a puppy in North America, look for breeders who are members of the Old English Sheepdog Club which has a code of ethics breeders must adhere to. This code includes testing for health problems; at one point Sheepdog’s life expectancy was down to about 7 years due to health complications. Better breeding now places the average back where most large breeds are – around 11 years. If buying a puppy outside North America, again, look for a breeder who is conducting the appropriate health tests on all adults before breeding.

Much like people do, dogs delight in a little selection in their diet regimen.

Is there anyone who hasn’t been incredibly busy lately? It seems to me that

Gracie ignoring camera and person. Learning the alphabet was hard work for me; once

Teamworks Dog Training: Where and How Can I Train My Dog?

Can My Dog Eat Pinto Beans? The Answers To All The Questions!

Can Dogs Eat Beef Jerky: a Few Facts From Life!

Claritin for Dogs: Dosage and Answers to Questions
Adblock
detector