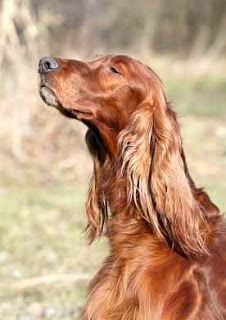 When I was growing up our family — well, my Mom really — had several Irish Setters. They were called…
wait for it…
Red. 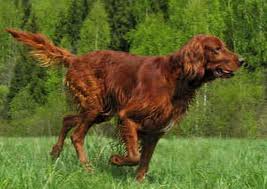 Yes, with all of our imaginative powers the first Setter was Red One and the second was Red Two. At least Red was an easy name to learn to spell and remember. 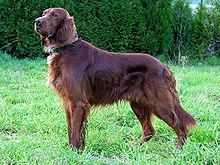 Red One was a short lived dog. He was with us just under a year before his tragic death. Red Two on the other hand lived a full life. For thirteen years he was a companion, playmate, guardian, and friend. He was born in Northern Ontario, then moved with us to Western Canada. We had a farm at the end of an eight mile gravel road so traffic wasn’t a concern; Red got to run freely. When he was a senior he moved back to the States with my parents where he spent his retirement years napping in the sun. 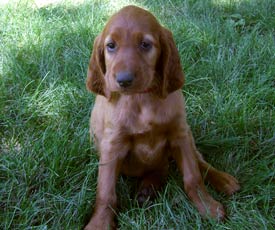 Red was an old fashioned Irish Setter, the kind that still had big bones and some size. In fact, he was slightly over-sized, the biggest pup in his litter. His family came from dual lines with both bench and field champions in his family. He was always destined though to be a very handsome companion and beloved family member. Dad had quit hunting when we moved to the farm so the fact that Red was a natural bird dog was just an interesting fact. It was always fun though to watch Red point a bird, then flush it. He started pointing as a pup and made a great bird dog. We appreciated his talent even if we didn’t use it for hunting purposes.

Red was a free spirit who loved to run the 1/2 mile down our property to the river that formed the southern boundary of our property line. He enjoyed chasing the birds along the river and seeking out dead salmon that sometimes washed up on the shore. Nothing pleased Red more than finding a nice rotting salmon to roll in. Rotting fish carcass was his favorite personal cologne.

He also enjoyed the coyotes who had a den near the edge of our property. In the evening you could sometimes hear Red running with the coyotes. They would howl and he would bark. At first we worried that something would happen to Red when he went near the coyotes. Then we had a chance to observe. Red was bigger than the coyotes and so fast it was unbelievable. Sometimes he would chase them. Sometimes he would play tag with a female. He thought it was all a game, albeit he had the sense to know it was a dangerous game; he never let them get too close.

Red was Mom’s heart dog – her special, once in a lifetime companion. Mom still loves Irish Setters with a preference for the old fashioned, larger Setters. She can’t bring herself to own one now that she lives in town though. She felt that Red had the ideal life on the farm with over a hundred acres to run. Irish Setters do like to move. They can be kept in smaller spaces than a large farm though.

Irish Setters can make really lovely family dogs. They like people and other animals — some do have some prey drive. Red was very tolerant of all other animals and was a great farm dog but some Setters don’t do well with cats. They are often kept because of their beauty and fun loving nature but Irish Setters can still hunt too. They make good upland game bird dogs. 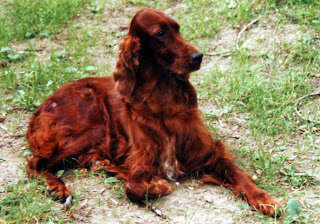 There are Irish Setters who need adopting too – check with Petfinder.com and Irish Setter rescue if you think this is a breed you might like to adopt. 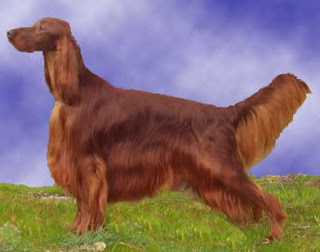