A working dog designed for a specific purpose, the Doberman’s temperament has intentionally been “softened”, particularly in North America, by breeders who wanted a dog that was suited to more than just guard work.

Typically, Dobermans are still naturally protective of their families however, some individual Dobies are so loving and friendly that even their owners question if they would be protective should the need arise. Among Doberman breeders, the consensus generally is, if you ever needed your dog’s aid, the dog would probably rise to the occasion.

My friend’s family had a female Doberman that was one of the sweetest, kindest dogs I’ve ever met. She would bark with joy when anyone drove into their yard, then wag her way over to greet visitors. Technically, this made her a watch dog, because she let everyone know when someone had arrived.

I once worked with a dog trainer from a city police K-9 unit who claimed that the Dobermans he’d met were either always “on” or “off” – that is, a Dobie either was a constant watchdog, alert to trouble, or it was a big love sponge. While this may have once been true (we had this conversation almost 30 years ago) selective breeding has made changes within the breed.

Modern Dobies are capable of being alert and wary of strangers, while sweet and loving with those they know. A Doberman is devoted to their people and also has the potential to be a therapy or service dog. This is a very intelligent breed that trains well and was designed to be around people. This is not a breed that does well when left alone in a yard – they require social interaction. They would prefer to be couch potatoes who receive a couple of brisk walks a day.

Some lines have more drive than others, and require more activity. Adopting a Dobe from a rescue can allow a family to know ahead of time how much exercise, and additional training, their companion will need. And just because a dog is a Doberman, doesn’t mean it was born to be a guard dog. Many dogs can be watch dogs, given that a watch dog’s role is to alert people (bark) when there is something out of order, or a new person in their environment. 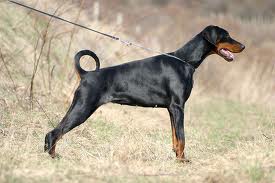 Guard dogs are usually trained to provide specific responses to specific stimuli; these responses usually include the capacity to escalate behavior that deters a person, like giving chase, or grabbing a person. Just as not all Labradors were born to be guide dogs, not all Dobermans were born to be guard dogs. Some Dobermans have personalities that are too gentle for this kind of work.

A watch dog is like a lock – it helps keep honest people honest. A barking dog deters people from wandering into one’s yard and home. Burglars also usually avoid the houses where there is a barking dog. And some breeds have a look and a reputation which deters people from interacting with them – which can also lead to downfalls like breed specific legislation.

In North America, Dobermans’ looks have been shaped by the established practice of cropping ears and docking tails. In many European countries cropping and docking are no longer permitted. North Americans are showing a slowly growing willingness to leave their dog’s ears natural – I think we’re a long way out though from seeing Dobe’s here with natural tails.

Regardless of how a Doberman looks, they tend to have big hearts, strong bodies, quick minds, and a willingness to please their people. A devoted breed that is suited to people who want a willing pupil to train and an oversize lap dog to cuddle, this is a breed that deserves a better reputation then they sometimes have.