A confluence of events has taken place in our lives very recently. (Confluence can mean a coming together of water, or things, and there’s a reason that a term sometimes used to describe a meeting of water comes to mind in this case….more on that later.)

Within the last year I did a post mentioning that there are two breeds of dogs that are over-represented in shelters and rescues everywhere: Pitbulls and Chihuahuas. These breeds are on my mind a lot as I see people who are not interested in bettering either breed continue to produce puppies, and once adults these dogs often end up in shelters, where many are euthanized each year.

Both breeds can be poor fits when it comes to living with other animals, and due to the sheer number of each breed in rescues, pounds, shelters…many go unadopted each year.

In my personal life, it has now been over three years since the ‘year of loss’ when I lost three human friends, and three canine companions. The canine companions included both my rescue dogs, one of whom had a complicated personality, the other of whom was old and ill;  both had been considered ‘unadoptable.’ While I’ve done some short-term fostering since then, I haven’t taken on much in the way of serious dog rehabilitation.

I’ve realized recently that I’m ready to consider rehabilitating a rescue dog again; when I take on that challenge it is always with the understanding that there has to be space in my life for that dog to stay forever.

I approach rehabing a difficult dog with the attitude that we don’t know where the outcome will lead us. We may end up with a canine citizen whose ideal home is with someone else. We may end up with a dog who while much more comfortable and also less of a threat to the world around him/her, is best off staying with me. I can have my challenges with human relationships but I understand dogs. Sometimes dogs who have difficulty being in safe relationships with other humans, get along fine with me. I also discourage a lot of coming and going from my home, so we’re a relatively low-action home from the point of view of visitors

The final tributary to this confluence is a hole I’ve been feeling in my life lately. I’ve been missing the huge personalities that were the ‘small’ terriers who have lived with me in the past, my two Schnauzers and Scottie. Small dogs can have big personalities in a way that would just be obnoxious in a large dog. I’m not talking about dangerous behavior like snapping at people. I mean things like marching into a room, grabbing the biggest toy out of a pile and dragging it over just so the dog can lay on it and not allow other dogs to play with it. A little rude but also, in my sensibilities, amusing.

These river of feelings, thoughts, and impulses came together for me Friday evening. On rare occasions I get an impulse to stop by the local human society to see if there is anydog there who needs my assistance. I’ve helped a few other people and dogs connect this way. I wasn’t expecting to find anydog last night because I keep an eye on the web page and I expected to find nearly empty dog-runs. I just had a really strong impulse to stop anyway. 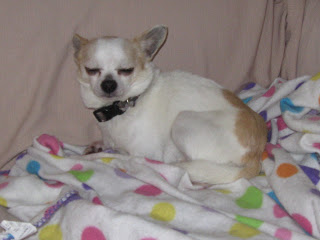 What I found surprised me. Curled up in a dog bed, in a room by himself was a senior Chihuahua who wasn’t on the web site. I was aware of his story – I knew that he was part of a group of four dogs that had been pulled from a high-kill shelter in a more populated area of our state, and brought here in an effort to find a home. Interest had been expressed in this little dog from the outset, on the group’s Facebook page, and since this had taken place weeks ago, I was surprised to see him still in the shelter.

It turns out he’s one of those hard to adopt dogs. A combination of strong personality, fear, possibly abuse, and decidedly abandonment. He’s got issues. He doesn’t look as old as he is, so I guess it wasn’t until he was taken to a local vet that they discovered he was a senior. The other three dogs pulled from the high kill shelter were young, big dogs and the last one was being adopted as I went into the room to sit with this shaking little Chihuahua. Unlike the big dog across the hall who was romping and impressing his new family with his outgoing personality, this guy avoided looking at me and began growling. I got it. I sat down, and started to talk to him about the few little toys someone had brought in, that he obviously wasn’t interested in. I quietly commented on a little green rubber pig, not looking at the dog but at the piggy in my hands.

It took probably five minutes for him to settle down, it didn’t help that people were going by and staring in the big window that looks into the room, smaller children yelling, “I want that one, I want that one!” and smacking their hands on the window to indicate him.
“Yeah, that freaks me out too,” I told him as he growled.

He decided I was worth checking out, getting out of his bed slowly, stretching and yawning – an indication that he was actually nervous and not sure what to expect.

I began to exam a small white stuffed rabbit that had a little slit in his back where a squeaker had been removed. The dog sniffed me over. Then his posture changed. He visibly relaxed, just a little, and moved sideways, in the small dog way of indicating he was prepared to be possibly picked up.

I’ve had enough small dog experience to know that sometimes a small dog will indicate he is willing to be picked up, then change his mind, or turn out to have a sore spot on his body that makes him yelp/wince/nip. I proceeded as gently as possible and just boosted him enough so he could get into my lap – I was seated cross-legged on the cement floor.

Some more sniffing and he settled down. Then he began to talk to me a little, small noises that indicated he had a hard-luck story he was willing to share with me. I asked him if he wanted to come home with me and he indicated that this was preferable to remaining where he was.

As I was filling out the paper work, one of the shelter workers went to get him. She came back in a moment with his little leash and not him. I said, “He growled at you.”

I followed a second shelter person in to get him from his room. He was ready to give her attitude and then he saw me. He stoped paying attention to the shelter person and started to move towards me,  allowing the leash to be snapped on his collar. When I took the leash he transformed from a shaking little dog, to a big dog in a small body.

He suddenly started to prance, and moved forward like a dog on a mission. Without looking to the right or left he proceeded me to the front door. I said his thank you and good-byes for him as I followed his determined exit from the building. He stopped just long enough to mark a spot on the snowbank outside the front door and we crossed the parking lot to head home.

Right now we call him Chi-Chi, although his nick-name is Naples – my shortened version of Napoleon. As I expected, my girls were flummoxed when he marched in and started barking and growling at everyone. Lil thought maybe one of the cats had started taking steroids. Gracie was exposed to Chihuahuas as a pup and seems to have retained a level of respect.

Jenny just seemed stunned that anyone could – or would- make a dog that small.

Last night we started with a night of Chi-Chi barking at everyone. A lot. We ignored him as he got used to the fact that the other animals are going to be part of this new environment.

For his part, he’s marked a few things, growls when he’s told “NO” (which I actually find amusing but a non-deterrent – he continues to hear the NO word) and proved to be pretty tough when it comes to the weather here. He doesn’t hesitate to go out into the snowy world and mark abundantly, without shaking or shivering, or complaining about a lack of a jacket.

At this moment, I’m writing on my lap tap computer, which is precariously balanced on one knee. Gracie tried cuddling up with us for a while but is getting bored with a dog who growls every time she touches him, so she’s gone to lay in the sunshine on the back of the other couch. Chi-Chi is curled up on the part of my lap not being used by computer, his nose tucked between me and the couch. Lil is curled up on my other side. Chi-Chi is getting used to the other dogs and, in typical little dog fashion, will occasionally growl if anyone comes too close, without actually bothering to look up at them. He’s quickly learning that life now includes sharing space with bigger dogs.

It will be interesting to see where this path takes us. I think we will be trying out a belly-band in the near future…for the same reason that ‘confluence’ came to mind this morning – whole lot of liquid being consumed and converted to marking, golden streams around here lately.
Good thing we keep LOTS of enzyme and cleaning products on hand.

Much like people do, dogs delight in a little selection in their diet regimen.

Is there anyone who hasn’t been incredibly busy lately? It seems to me that

Gracie ignoring camera and person. Learning the alphabet was hard work for me; once

Teamworks Dog Training: Where and How Can I Train My Dog?

Can My Dog Eat Pinto Beans? The Answers To All The Questions!

Can Dogs Eat Beef Jerky: a Few Facts From Life!

Claritin for Dogs: Dosage and Answers to Questions
Adblock
detector